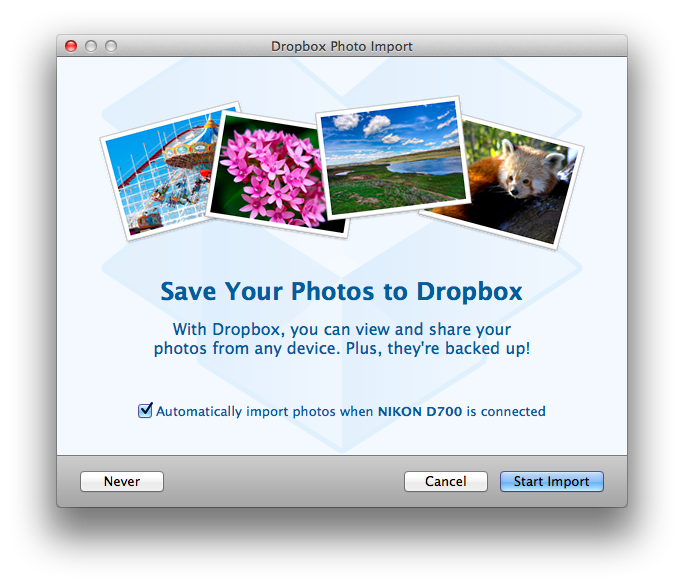 The whole Dropbox idea has been a very successful story so far. And now they’re apparently looking to get photographers to use their service. A recently released experimental version â€“ read “you should backup your files or otherwise it might eat them along with your firstborn” â€“ now comes with an integrated tool that detects a camera or memory card once you plug it into your USB port. There’s also an experimental Android version available (APK here) that uploads files automatically in the background using 3G or Wi-Fi.

After detecting a camera/card you are presented with a simple screen (see above), asking whether or not you’d like to import the photos and videos to your Dropbox. All uploaded files then show up in a new “Camera Uploads” folder and will be saved in the cloud.

Dropbox Photo Import also comes with a little gem: For the first upload you get 500 MByte, afterwards for every 500 MByte uploaded you’ll also receive 500 MByte of space. In total you can reach up to 5 GByte this way.

It worked flawlessly with some Nikon RAW files (NEF) I threw at it, although CPU usage was rather high for what looks like a simple copy process. On Windows you have to have AutoPlay enabled to make it work. Linux or Mac OS X 10.4 aren’t supported. Here are some screenshots using the app on OS X 10.7.3: