With iOS 13 and iPadOS 13 Apple has added the ability to natively support external storage such as thumbdrives or SSDs on iPhone and iPad in Files.app. You might have to use a powered USB dongle* to use the Lightning port on older iPads. After Teymur asked what filesystems were supported on iPadOS/iOS 13, I decided to test some variations on 12.9″ iPad Pro (2018) with a SanDisk Ultra 64 GB Dual Drive running developer beta 2.

@holgr do you know if I need to use a specific fileformat for external ssds like a t5 on ipados?

These filesystems are recognized as of iPadOS 13 developer beta 2: 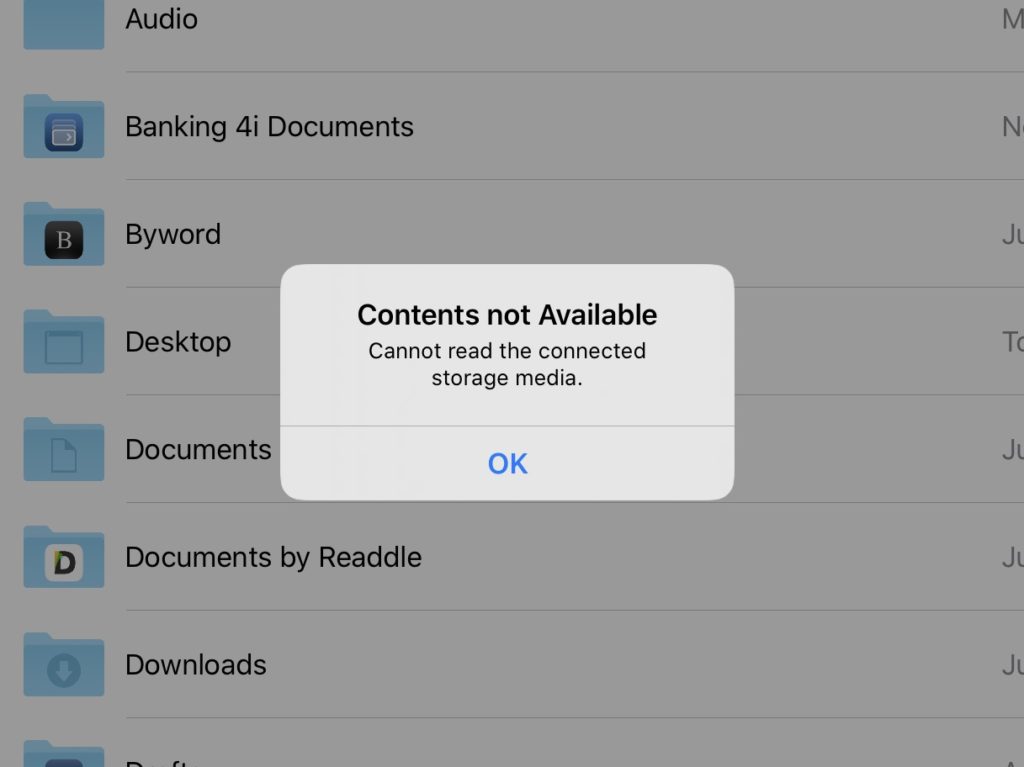 These filesystems aren’t recognized, some of them don’t even result in an error and just silently fail as if there’s nothing connected:

👎 NTFS: you get an error message

This list might still change in future iOS/iPadOS 13 betas. For example APFS was added in beta 2, so there’s a little bit of hope that at least read support for NTFS and maybe even encrypted APFS/Mac OS Extended volumes might get added in upcoming betas. I have no idea how much work is necessary to add any sort of FileVault support and it might be just too late to make it into this year’s version of Apples operating systems for iPad and iPhone. It’d definitely be nice to be able to use encrypted drives between Mac and iPad, but the current state is already a giant step forward.

tl;dr for beta 3: they removed some error messages and now the drive just doesn’t show up.

This article is meant to serve two purposes. Fist tell you – from beginning to end – how to turn a Raspberry Pi, the tiny computer running Raspbian, into a HomeKit camera, that you can access using Apple’s Home app. This works for live streams or just stills.

The second reason for this article is reminding me how specific pieces are done. I keep forgetting specifics because I simply don’t have to do some steps on a regular basis or there are tiny details that I’m not 100 percent sure of. I won’t go too deep into Linux specifics, there are other (and better) places to learn about using the command line.

END_OF_DOCUMENT_TOKEN_TO_BE_REPLACED

Just leaving this here for my own sake, after having to deal with these annoying issues on the macOS Mojave Beta. When trying to build various Homebrew apps that use Python (or are Python) I ran into something like this:

The fix is as follows, thanks to sfdye over at GitHub:
$ brew update
# (Re)Install CLT (command in one line):
$ sudo installer -pkg /Library/Developer/CommandLineTools/Packages/macOS_SDK_headers_for_macOS_10.14.pkg -target /

That stopped these zlib errors for me.

Using macOS High Sierra? Make sure to give your root user a password, because of this serious security issue:

Dear @AppleSupport, we noticed a *HUGE* security issue at MacOS High Sierra. Anyone can login as "root" with empty password after clicking on login button several times. Are you aware of it @Apple?

Update: Check the Mac App Store for Apple’s official fix. It’s being automatically pushed to your Mac as well.

Dave Mark writing for The Loop:

I love this tip. Here’s how to do it:
– Bring up Apple Maps.
– Double-tap in the map, but on the second tap, don’t lift your finger. So tap-lift-tap-leave.
– Now [with the finger still down] slide up or down to zoom in and out.

As Dave notes Google Maps supports the same gesture. It actually has supported this for ages and I always found myself trying to do this in Apple Maps. With iOS 11 I was happy to find out it finally works the same. Well, I should rather say works similar, because the directions are flipped on Google Maps: move your finger up to zoom out and down to zoom in.

Photoshop Lightroom on your iPhone and iPad does not support the native use of user defined (Smart) Filters. And unlike photos you aren’t able sync to them to your devices either. However there’s a trick to be able to use filters you have in Lightroom on your desktop on your smartphone and tablet.

END_OF_DOCUMENT_TOKEN_TO_BE_REPLACED

When Mike and I started Instagram nearly two years ago, we set out to change and improve the way the world communicates and shares. Weâ€™ve had an amazing time watching Instagram grow into a vibrant community of people from all around the globe. Today, we couldnâ€™t be happier to announce that Instagram has agreed to be acquired by Facebook.

Now that Facebook has acquired Instagram, I’m sure some people are trying to figure out how to get their photos out of it. Instaport.me is one service that offers you a way to export your pictures from Instagram.

After authenticating with your Instagram credentials, Instaport will gather your photos and offer you a ZIP file after it’s done. I had 232 photos which were 21.3 MB. Here’s the link to delete your Instagram account in case you were looking.

Congrats on that $1 billion though! 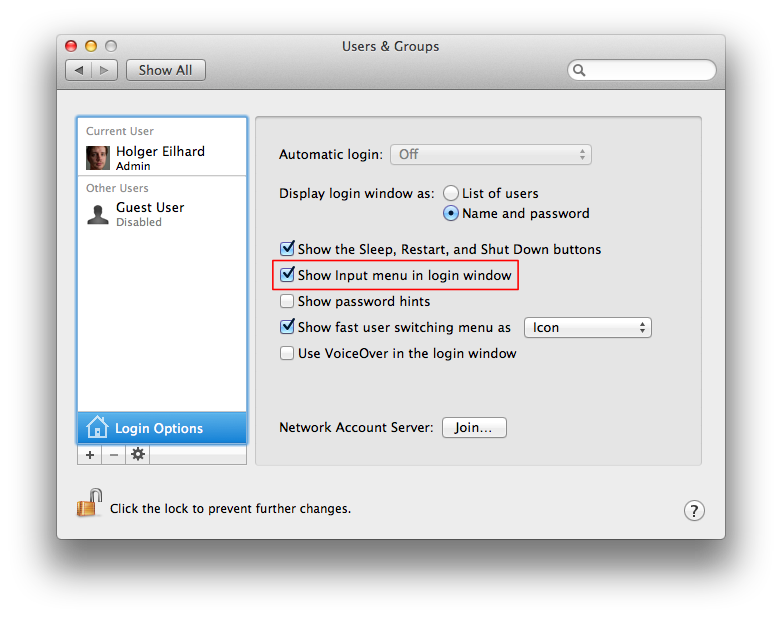 This is more of a “note to self”: After enabling FileVault on my MBP during installation, the input field for entering your FileVault password is using the US keyboard layout. That, in combination with an actual German keyboard, is good for some fun during your next reboot â€“ of course only if you’re using a strong password, which includes special characters.

To be able to change the keyboard layout at boot, you have to tick the box as seen above. 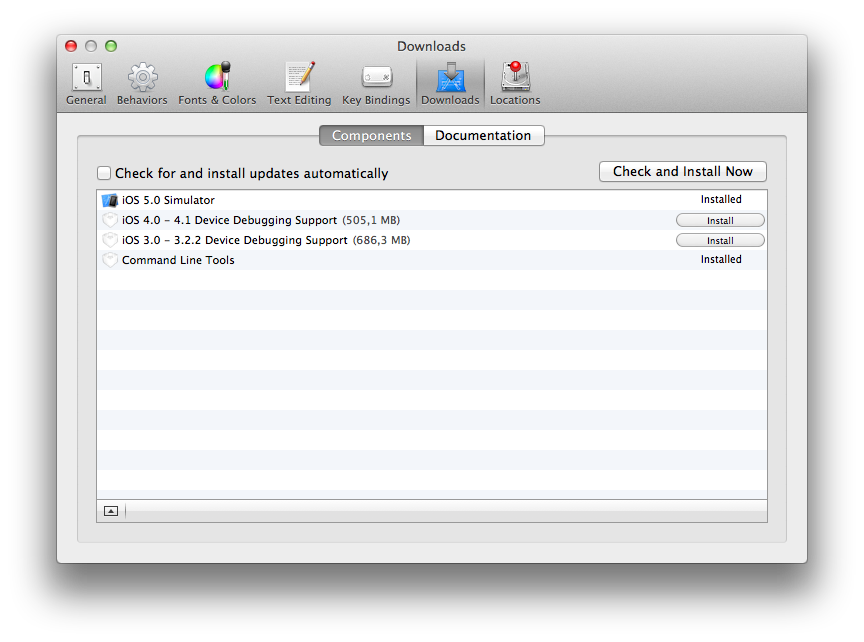 Those of you who are using the updated versions of Xcode, like Xcode 4.3 or 4.4 â€“ which is available for the Mountain Lion Developer Preview â€“ will probably run into an issue with homebrew at some point.

Xcode doesn’t install into /Developer any longer and is now an app bundle like most other Mac apps. Homebrew though expects some files to be available on your Mac to do its job, cc just being one of them. As a result, running brew doctor will tell you that something is wrong with your setup.

To get these command line tools back, you have to install them manually (via Homebrew on Github). After installing Xcode you get them by doing the following (see screenshot above):

There you go, brew doctor will be happy with you again.

For Lion there’s now also just a Command Line Tools download. It requires a free Apple ID to access them. Be sure to check Kenneth Reitz’ blog post about it. 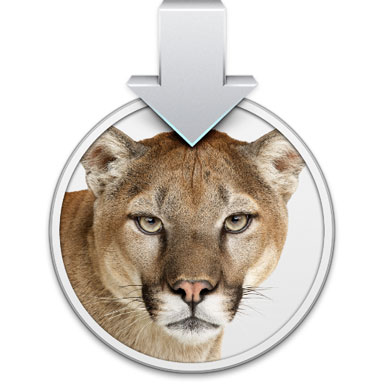 Haven’t tried it yet, but the process for creating a bootable OS X Mountain Lion install medium (USB stick or DVD) should be the same as it was for OS X 10.7. Same filenames, same places, slightly new icons, definitely new content.