Today Twitter pushed out some updates of their apps â€“ for iOS and Android â€“ and a new version of their website, which you get access to if you use their new mobile apps.

The completely new designed website and mobile apps feature three new main sections: Home, Connect and Discover. Home is your main feed that shows the tweets of the people you follow. Connect shows you the interactions with your fellow Twitter users.

Discover has five main sections of which most are basically unusable/don’t have any value for me, except for the Activity section. Stories supposedly shows you what’s happening on the web and might be interesting for you. Let’s just say it’s a total miss for me. I don’t care about Ice Cube and don’t even know who Albert Pujols is.

Activity is already known from the previous version of Twitter.com and shows you what the people you follow have done recently – think of it as the Facebook news feed. “Who to follow” is pretty self explanatory, as are “Find friends” and “Browse categories”. 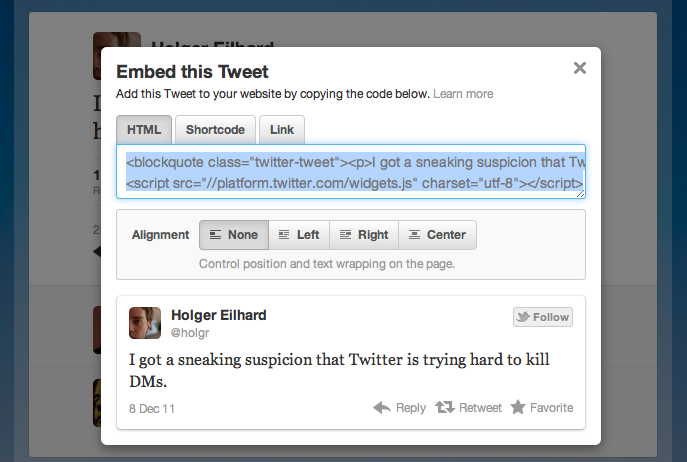 The new website has a great new feature that lets you easily embed a tweet, as you shall see below. Simple open the details page of tweet, like this one, and select “Embed this Tweet”. You are presented with several options to embed a tweet on your blog or elsewhere on the net.

I haven’t yet played around with the Android app, but I can tell that I haven’t yet warmed up with the new iOS version. I have various issues with it.

First: The Discover thing is totally useless to me, there’s nothing interesting to me and it just feels like a new variant of the oh-so-awesome Dickbar, with the difference that it’s now a less obnoxious button in the navigation bar I won’t use.

Second: That button is useless to me, but I can’t replace it with â€“ let’s say â€“ a button to directly access my DMs. You now have to access them by going to your profile and selecting DM â€“ or you could swipe up on the “Me” button. I got a feeling that Twitter is slowly trying to phase out DMs – or at least to get people to use them less. There’s this iOS hoop you have to jump through and they are also tucked away in the menu bar on the website. Kevin Marks also had his issues with the way they work now.

Third: As Federico Viticci discovered, you can only load so many Tweets. If you’re at the end of the list, there’s no “Load more” function to load additional Tweets.

New TweetDeck DOES NOT USE AIR. I repeat – NO ADOBE AIR in the new TweetDeck.

They also updated their recently acquired TweetDeck, which is now native for OS X and Windows, thus doesn’t require Adobe Air any longer. That said, I personally won’t be going back to TweetDeck any time soon, since I had various problems with it in the past â€“ namely randomly not showing tweets of the people I followed.

Now, who’s taking bets on when Twitter for Mac will receive an update?