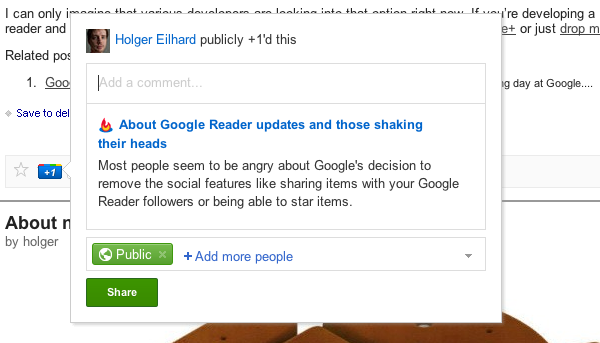 It’s been a little over 24 hours now that Google started rolling out the update for its RSS reader. There have been many different opinions about the changes. Most people seem to be angry about Google’s decision to remove the social features like sharing items with your Google Reader followers or being able to star items. Now they’ve been replaced with an integration of Google+. You can share your items with your people there, but you don’t get to see their shared items in your Google Reader view.

For me most of these features didn’t matter. In fact I haven’t been on the Google Reader site for ages – until yesterday, of course. Maybe I’m the odd one here, but I’m only using Google Reader as a storage and syncing facility for Reeder. I use Reeder on my Macs, my iPhone and iPad. If this app had its own backend for syncing across devices I couldn’t care less about Google Reader. I was actually surprised to hear that so many of my technology-aware friends are using the website and not some 3rd party reader.

Back to the social features. I can understand seeing your friends’ stories in Reader, but I actually prefer to see them in a social network because there’s usually a conversation happening around them, rather than just a single interesting story. At the same time I understand Google’s reasoning to integrate Reader with Google+. Only time will tell if this turns out to be as bad as the decision to put Google Buzz into your mailbox back in the day.

About the overall Google Reader situation however, remember those APIs all 3rd party clients use to access your feeds are unsupported by Google. They could pull the rug right under you at any time. They basically did that with the shared and starred items by giving you just over one week notice. Brent Simmons put it like this a week ago:

I’m not an RSS reader developer any more. But if I were, I’d start looking for an alternative syncing system right now. I can only imagine that various developers are looking into that option right now.

If you’re developing a RSS reader and would like to share your thoughts, I’d love to hear from you: @holgr, Google+ or just drop me a note!