Finally! Yesterday I got to get my camera out for an interesting tour again. Daniel and I went together in the early afternoon to visit an abandoned castle in the middle of Belgium that we first set eyes on a few years ago, but now it was finally the time to go there.

After driving through the nearby city of Celles to get some food we went on to the supposed location of the abandoned castle. The roads in the middle of nowhere seemed just liked that: abandoned. A few corners up the hill out of the blue our sat nav told us to go right – enter a small one lane road. Then the shock when we came across the hill: wood workers with multiple 18-wheelers apparently taking the whole park down. There was no sign of the castle, just two small walls standing up on each side of the road leading towards the park. That’s what’s left of the original private entrance to the whole area. There was no way we could just drive into that place. First thought: great, they are taking down the forest and already took care of the castle. 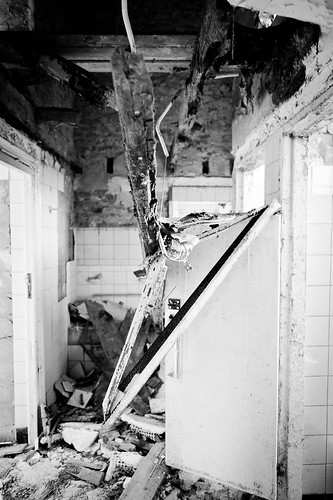 We drove past the workers, past the entrance, down the hill again and checked Google Maps (satellite view for the win – just saying) to find out that the castle itself is way beyond that park they were working on. So we drove around the area a little more to find a way up the hill. We parked the car and set on. Just the necessary stuff: Camera, one lens and memory cards, because we could already see that the climb up the hill would be rather steep and we might have to move fast. Thus, we decided not to take a tripod or backpack.

After a few meters on the road it was time to go into the forest. The small gate behind us – unlocked of course – and we kinda knew we were in the right place. Remembering the placing of the castle from earlier on we went right up the hill and didn’t stay on the “road” for a long time. It was a wise decision not to take anything more than the camera. Unnecessary clutter that stops you from moving, keep it simple!

As we went up we couldn’t see anything besides trees and more trees. No sign of a building, let alone a castle. The thoughts came back that they tore it down, for whatever reason. We decided not to stop until we saw either the castle or rubble. So we moved on.

Then all of a sudden we could see a small building and as we came closer the huge towers of Château de Noisy came up behind it. A stunning view! Small trees growing out of the towers. Open windows. Silence. Only some birds could be heard. As we came closer we found out we were at the back of the mansion with the rather big fountain, that nowadays isn’t home to water but to trees and various plants. We went around the outside at the back for a while and checked for possible other guests. Nothing to hear, except those birds.

Clack, clack, clack – taking shots of the awe-inspiring facade. Those massive towers looming over the forest. Absolutely stunning. Let’s check the inside.

Some chairs, a chalkboard, some machine with a handcrank and quite a few empty slides. As we moved in, the first thing we decided to do is to stay away from each other in case the floor collapsed. One wrong move and you’d go down. We found the first few rooms we entered in the basement were closed off from the rest of the castle because (at least) the second story came down and was now blocking the way.

So we went out again just to enter via one of the smaller emergency exits. Smell of burned wood inside – even though it once was a rather large bathroom. Turns not too long ago some people tried to burn down the place. Idiots! Fortunately they picked the wrong place and only burned a small patch of the wooden floor. Be warned: we heard (from a guy that was also taking some shots in the castle) that the caretaker is now making his rounds even more regularly since then.

After taking more shots of the large entrance hall with its still beautiful ceilings, we went up to the second level. The stairwell is still very stable, but the floor on the various levels itself – not so much. The wallpaper is tearing up from the walls like on every other abandoned building. One can only imagine how great this place must have looked in its better days. If these walls could talk. Thankfully, there isn’t much graffiti around the place and it isn’t even as trashed as other abandoned places I’ve seen so far. 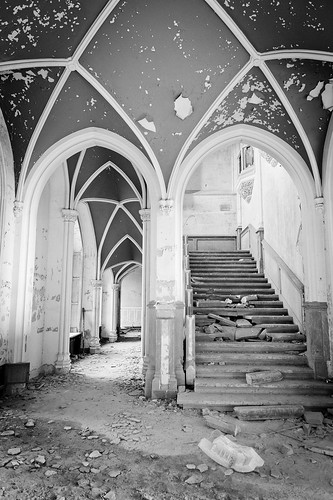 The wooden floors are wonky at best. You really have to watch your step. If you don’t you’d probably not only go down one level, but the next one too. One more time: stay away from each other.

We took a small stairwell, maybe a meter wide, up to one of the towers. These stairs, just as the main stairs that connect the basement to the second level, are still quite stable. At least they leave that impression. Sometimes there isn’t much left of the stairs itself but the stone they were once build on seems to be holding up quite good. My best guess: They took the actual stairs out to make it harder for people to get up to the towers.

We knew that we didn’t have much time left and already heard some sounds from the outside as we descended from the upper levels. I think I have seen about a third of the actual building while we were there. I don’t remember Daniels guess, but there’s still some things to be discovered.

Leaving the Château behind as we entered the forest again this really great feeling sunk in about having places like these so close to us and actually being able to see them in person. Yet, if you don’t know this abandoned castle is there you won’t find it by accident. Even from the surrounding forest you have to be quite close to it to see it, despite its size.

This place is staggering!

Check out the full gallery here.