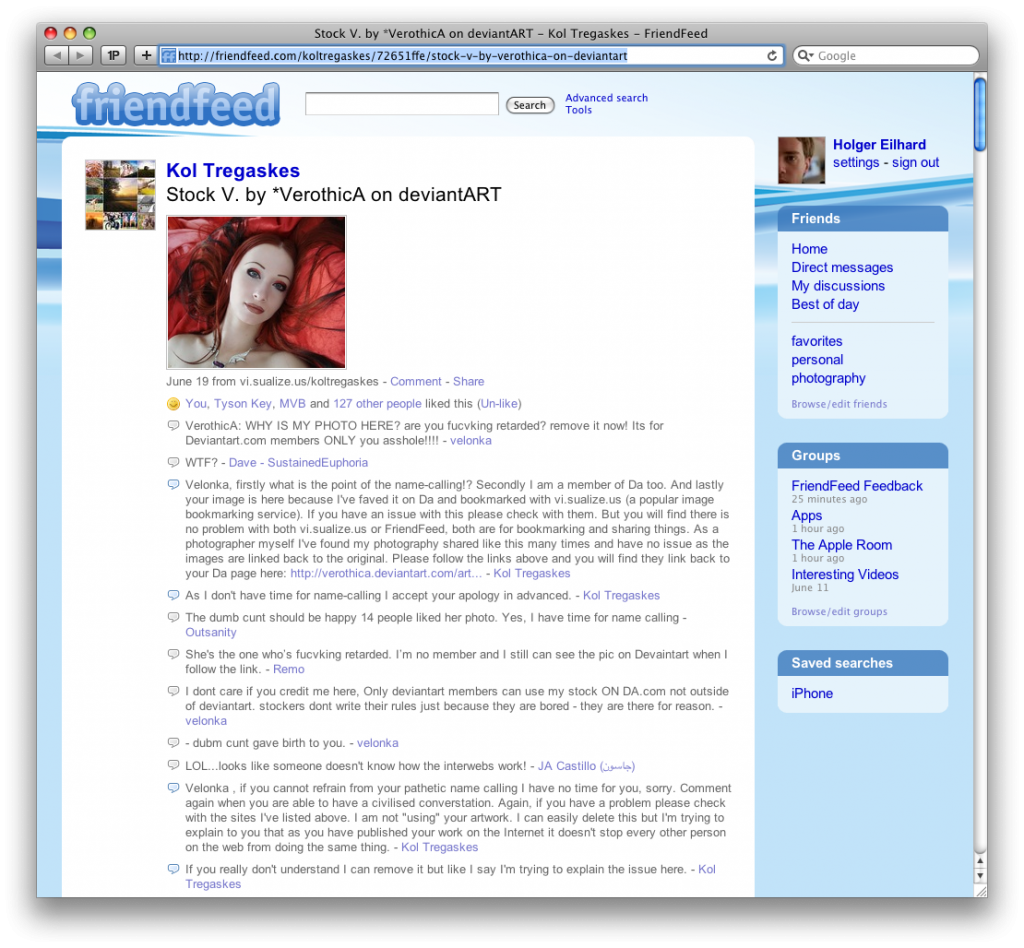 Over the past day there’s been a little “crisis” going on over at FriendFeed. Let me introduce the contenders first:

Now, after a few weeks of no action at all, the photographer noticed the photo on FriendFeed and didn’t wait a second to rain down some foul language on Kol:

VerothicA: WHY IS MY PHOTO HERE? are you fucvking retarded? remove it now! Its for Deviantart.com members ONLY you asshole!!!! – velonka

No, not some nice asking to take it down or – what my approach would have been – saying thanks for sharing. Full throttle from a stand still which shortly thereafter got her some flack from other commenters. And rightly so.

Only after various posts the lady apparently notices that her photo was posted as Creative Commons and removes that licensing. Of course, too little too late. Starting a conversation like she did, you are just asking for trouble. I’m wondering whether she is writing the people at Google, Microsoft and Yahoo letters in the same language because the photo is showing up there too.

I personally post most of my photos under a CC license (Attribution-NonCommercial-ShareAlike). If there are photos I don’t want floating around the net, which – let’s be honest here – will happen via Google sooner or later anyways, I simply don’t post them online. If someone takes them anyway and makes money off your work, feel free to sue them into oblivion. Been there, done that, although it usually just requires a well written letter to make them pay for their “mistake”. If you’re interested in more of this I can advise you to read some of Thomas Hawk’s articles on this topic.

But what does this whole thing mean in the bigger picture? Did she really think, as Joelle suggested in the thread on FF, that this photo was only visible to people within the DA community? What does DA among other sites do against “stealing” photos? What is the default license on DA? Flickr usually uses “All rights reserved”, which still doesn’t stop people from re-sharing the photos all over the internet. If it’s out on the web, you won’t be able to stop it. If you don’t want that to happen, there’s an easy way out: don’t post it!

What does this mean for sites like FriendFeed and other aggregation sites? If I click “Add to favorites” on Flickr or Zooomr, the photo soon thereafter will show up on FriendFeed and – via the FF widget – on my site, of course linked to the original source. If I share an article from CNET, The Guardian, Spiegel or wherever else, it will show up there too. These links are how the internet works, deal with it!

There’s no way to stop images – or any other media – appearing somewhere else and as long as you’re aware of that it’s all fun and games. If you don’t realize that you’re bound to run into trouble, especially if you’re using rude language to “prove” your point. I guess the whole internet is a mob – not just FriendFeed – or at least, can be.

Of course there’s a slight chance that she planned this all along. She got some results that’s for sure. At least her photo is all over FF now, internet probably later. Too bad the language is also linked to the picture.